John Maclean, Scottish Marxist, one of the leaders of the ‘Red Clydeside’ era died on 30 November 1923 in Glasgow at the age of 44 .His funeral was attended by thousands of his fellow Glaswegians and at the time, was the biggest funeral ever seen in the city. Even today John Maclean is remembered by a Commemoration in November with a march and graveside oration at Eastwood Cemetery.

Maclean’s daughter, Nan Milton, provided a biography on her father and her selected works of Maclean, In the Rapids of Revolution was the first published collection of essays, articles, pamphlets and letters by the revolutionary organiser and educator of Clydeside. The indispensable Marxist Internet Archive have his articles from Justice and Forward, available online https://www.marxists.org/archive/maclean/index.htm

January 2018 saw the publication of Gerard Cairns new book on John MacLean titled: ‘The Red and the Green – a Portrait of John Maclean. The former Secretary of the John Maclean Society has a chapter in the book that highlights Maclean’s links with Irish revolutionaries on Clydeside, and the practical assistance he 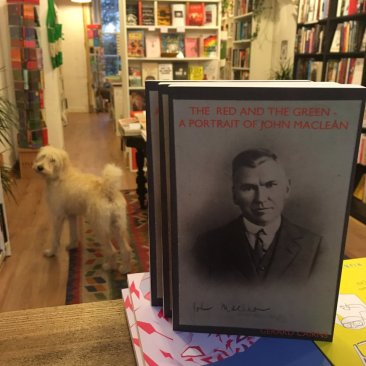 gave to the cause of Irish freedom. The author of “The Irish Tragedy: Scotland’s Disgrace”, is known better on the Left than in wider society. There has been a gradual increase in the literature that focuses on John Maclean and his political life but he remains still a controversial icon, partly because of his advocacy of a Scottish Workers Republic and rejection of the then newly formed Communist Party of Great Britain, an issue explored in John MacLean and the CPGB by Bob Pitt, on the Trotskyist left, who political disagreements with Maclean’s conclusions are open and reflective of the British Left’s attitude http://www.whatnextjournal.org.uk/Pages/Pamph/Maclean.html

That Maclean is published by others who politically oppose him, like the SWP’s 1998 study by Dave Berry, reflects the problem of how to incorporate an obvious revolutionary internationalist who stands for Scottish Republicanism in an essentially unionist Left. There was renewed interest in the importance of Maclean in the context of the debate about Scottish independence that saw the image of MacLean as a meme! While others equally ideologically hostile strangely try to claim him as their own [see Terry Brotherstone’s introduction to the WRP’s  Accuser of Capitalism published in 1986.]

Then [as today] radical socialists operate on a British stage to an agenda set largely in response to the British state centred on London. The perspective offered by Maclean did not gel with that metropolitan-influenced analysis. As Graham Bain states “Historians on the whole have been unkind about John MacLean.” Drawing upon his own mythologies, MacLean argued for an anti-war class patriotism, to refuse to fight each other over the interests of Europe’s capitalist classes. The call to break up the British state through Scottish Independence was “All Hail the Scottish Workers Republic” and not the patrician bourgeois call of ‘Scotland Free’. 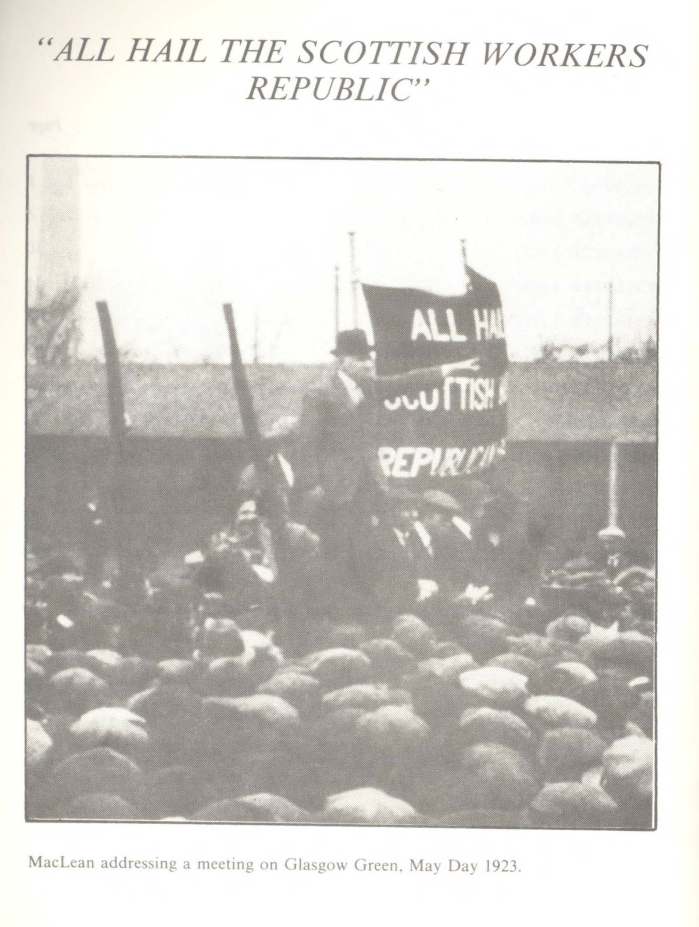 “Scotland must again have independence, but not to be ruled over by traitor chiefs and politicians. The communism of the clans must be re-established on a modern basis. (Bolshevism, to put it roughly, is but the modern expression of the communism of the mir.) Scotland must therefore work itself into a communism embracing the whole country as a unit. The country must have but one clan, as it were – a united people working in co-operation and co-operatively, using the wealth that is created.”

There are a minority of activists who will regard John Maclean as a legacy for today. His dedication and determination alone means he should not slumber in some ill-deserved obscurity. His expression and contemporary analysis maybe dated, his Marxist optimism and appeal to the working class endure:

MacLean, John (1973) The War After The War Socialist Reproduction.

MacLean’s pamphlet ‘The War After the War’ has been republished by the Bristol Radical History Group.